Are you looking for a wide view camera like a 360-degree game camera?

In this article, you can read a review of the best 360 trail camera in order to decide if this model would be ideal for you. 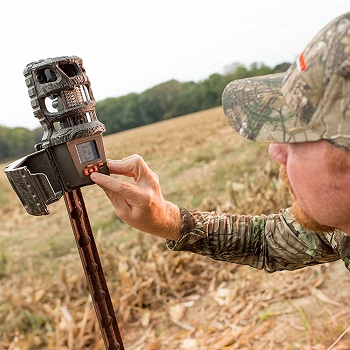 The most game cameras have a 120°wide angle or less, which means that these cameras can record every object what is moving in front of the camera and behind it. Unlike these trail cameras, 360 game camera is capturing all that’s passing around it. This type of camera has a 360°wide angle.

The 360 game camera works the way it has a moving lens which is turning around for 360°. The lens is activated when the sensors notice movement. No matter if someone is standing behind the lens. When the camera detects movement, the lens automatically turns on this side and continues to move for this object, capturing photos.

Where Can You Use A 360 Degree Game Camera?

You can set a 360 trail camera in the wood if you need it for hunting purposes. You can also use this type of camera for your home monitoring in order to protect it from stealing. This camera is practical for your backyard, too. It can oversee every part of your huge farm area. Farmers can also put the camera in their field to supervise if wild animals or birds damage their crops and so on.

How To Set It Up?

You should set up a 360-degree trail camera on the opened place in order for the camera can turn around. You can purchase a special style tripod or use things from the environment. For example, you can use a pillar in the field or pier if you want to capture the water area.

Wildgame Innovations is a one of a few brands that offer 360-degree trail cameras. We will see its best model of 360 trail camera and its version that are available on the market. You can find Wildgame Innovations cameras in webshops like Amazon. On this site, you can learn about all its specifications and watch the pictures of the product, so it’s helpful.

This 360 trail camera is a little longer than average trail cameras. It is in brown color and in the middle, there is an aperture for the turning lens. In the bottom part, there is cover and under that, you can find a screen and setting buttons.

Panoramic View In Day And At Night

The main feature of this camera is its panoramic 360-degree view. The lens turns around no matter it’s day or night. This feature will be turned on when the camera is shooting photos and record videos. When sensors identify motion, it takes 1,5 seconds to capture it. The quality of pictures is 12MP and that’s one of the highest resolutions of trail cameras. The video has 720P resolution which is lower trail camera resolution, but still good.

This camera can capture a 360-degree picture at night and that’s important because a lot of deers and other animals are active in the evening and at night. For good night vision, the camera has IR light with a range of 70 ft, which is satisfying distance but not the longest a trail camera can require.

The Equipment You Have To Purchase

The batteries aren’t rechargeable. You will need 8 AA batteries which can last around 6 months. You will also have to buy an SD card of up to 32 GB memory because this Wildgame 360 camera doesn’t include these accessories. 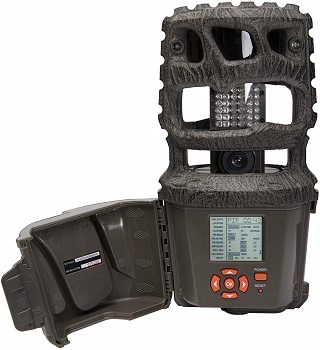 The thing you will get in the box is a T-shaped mounting bracket for the camera installation. If you don’t know how to set up, it’s helpful to check the Wildgame Innovations 360 trail camera manual. If it won’t stand well on the ground, you can buy separately a tripod. It’s better to set the trail camera safely because it can fall down and crash.

It’s a pity that this camera isn’t much durable in bad weather. So this product won’t handle rain or snow and pictures will be bad quality. To prevent damage in bad weather you should set something like a roof above this Wildgame camera. It’s also advisable to mount the camera on the knee level because then deers don’t notice it easily.

The little difference between this older generation version and the new one is in color, but both cameras have camouflage design. So you can be sure animals will ignore it. Moreover, this older version is more bad-weather resistant than the model I reviewed above.

This Wildgame Innovation 360 trail camera doesn’t differ a lot from the other trail camera, but it stands out because of the 360-degree panoramic view. So this camera would be very useful for you if you want to oversee a wood, but also it’s practical for home security.

If you want to see what other brands offer, read this post about the best-rated trail camera. If you need more idea which camera for hunting to buy, check out this post about deer camera that sends pics to phone. >Or if you are more interested in birds, you can read this best camera for bird photography post.