Would you like to capture animals in the wild but you don’t have time to wait for them?

Do you wish to have a motion-activated game camera that will do work for you?

Then this post is for you because I will review 5 best motion-activated wildlife cameras. You can find out how motion detector works and see which of top wildlife cameras motion activated would be the best choice for you. 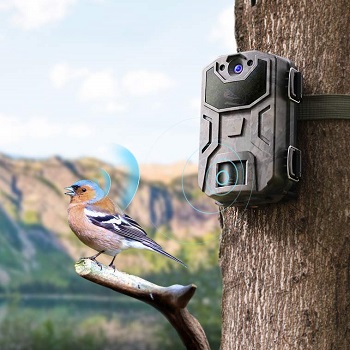 What Is Motion Activated Wildlife Camera?

Wildlife cameras that are motion activated are trail cameras with sensors that recognize every movement around the camera. When sensors notice something is passing by, the camera automatically shoots a photo. This way you can have pictures you need but you don’t have to be in the place waiting for the moving object you are waiting for.

Where People Use Wildlife Cameras With Motion Activated Feature?

This type of camera you can use if you are a hunter or wildlife enthusiast who wants to watch animals and have photos of them. In this case, the motion-activated wildlife camera is an ideal choice for you because animals won’t notice a camera and it won’t disturb them, unlike people. So you can watch natural animals’ behavior in the wood.

These cameras are designed not to be noticeable. They are small enough you can set them on a little angle and other small places. This type of camera doesn’t make noise when it notes a movement and captures a photo. There isn’t the sound which could frighten animals, so you don’t have to worry they will escape from the camera.

This hunting motion camera comes in green color and it has a screen on the lower part. It has slots for the strap which use for installation on the tree. The camera also includes a tripod and 8AA batteries which can work on average 6 months. Its material is waterproof and dustproof. 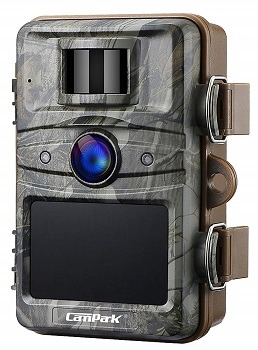 This Campark motion-activated trail camera has a photo resolution of 14MP and 1920*1080 video resolution. Its 0,5s trigger can catch very fast movements, so it’s ideal for hunters because animals rest rarely. The pictures taken in a day are colored and at night the camera will capture black and white photos but the quality is still very well.

Detailed Objects Captured On The Long-distance

The camera activates motion detection on the distance of 20 meters which provides you to see a large area of the wood. Because of the high-quality resolution, you will see clearly every object even 20 meters far away from the camera. 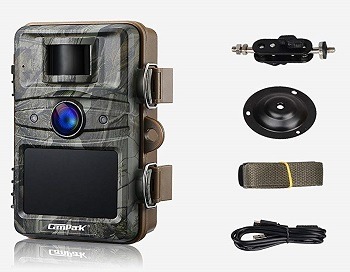 The pictures this motion sensor camera outdoor wildlife makes you can on the camera screen or you can take them on your computer using a USB cable. The photos are is JPGE format and video in AVI, but you can convert if you want. The camera can record video which lasts the most 3 minutes.

Screen Inside The Camera

Victure Camera is like almost trail cameras colored to be able to blend in the wildlife environment. You have to open “the door” of the camera and then you will see the screen made for you to watch the photos which the camera captured. It’s waterproof, so you can set it up on the tree with equipment included in the package. 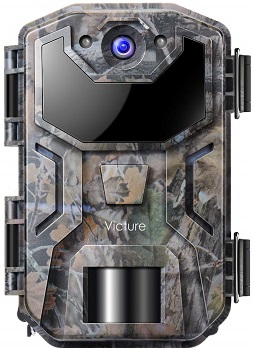 The main advantage of this wildlife motion-activated camera is its high-quality night vision. At night the camera shoots no glow photos with a wide range of visibility. It includes low-light technology and makes no noise in order not to disturb animals.

Just like at night, the photos captured in daily light are the same high-quality. The photo resolution is 20MP and video resolution is 1080P. Recording a video, this trail camera has a possibility to record sound if you want, for example, to listen to bird voting. 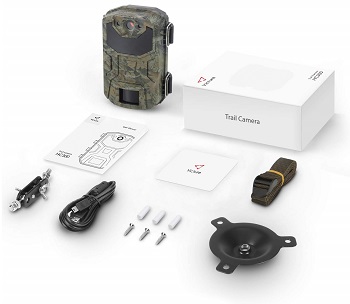 The Victure trail camera has 0,3s motion trigger which is good enough to capture very fast movements. You can set the camera on the mode which enables shooting 3 times when sensors detect moving objects. There are more available settings such as timestamp, PIR interval or you can protect your camera with a password.

Colored To Blend In The Environment

This motion sensor camera outdoor wildlife is in green color and has an antenna on the top. There is a screen inside the camera so you can watch the photos before transferring them to the computer. You can also see pictures on your smartphone because the camera is connected to your phone via the Spypoint mobile app. 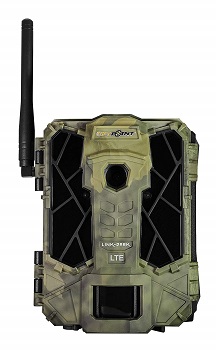 This is a 4g trail camera, which means that it is connected with your mobile phone. You have to install the Spypoint app and then you can receive a photo on your smartphone at the moment the camera shoots it. However, if you want to use it for free, the camera can send you only 100 photos per month. If you want to receive more than 100 photos, you will have to pay about 10 dollars per month.

Spypoint trail camera has 0,7s trigger and 12MP photo resolution. Just like the model reviewed above this camera has 3 shots mode. The camera stores the photos on SD card which is not included. You can put an SD card that can store the most 32 GB. The batteries have a capacity to last about 4 months the camera works all the time. 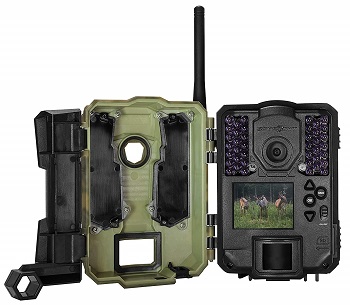 This motion-activated trail camera requires SIM card need for connection with a smartphone, but it doesn’t include an SD card. In the package with the camera, you will get a Start guide which will help you to activate this camera, install the app and connect your phone with this trail camera. In the box, there is a bracket and strap you can use to set the camera in the wood.

Batteries And SD Card Not Included

This Toguard trail camera has normal size, green color, and lens in the middle of its front side. Inside the camera, there are 8AA batteries which are not included. If they are in standby mode the batteries can last till 8 months what is very good because you don’t have to change it often. You can also buy separately micro-SD memory card and put it in a slot on the camera. You can connect this camera with your computer using a USB cable. 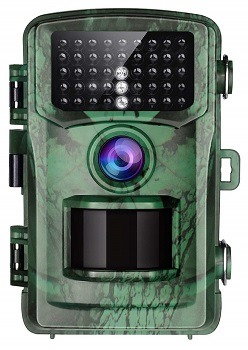 This camera has a very high resolution. The photos have 14MP and videos full HD 1080P. The camera can capture fast movements because it has a 0,5s trigger. Toguard trail camera has a 120°wide angle and good night vision, so it’s a great choice for monitoring your yard at night.

The range of motion detection is 22 meters and it doesn’t matter what time is. The photos are quality at night as well as in daylight. This feature can help you to identify the thief in every part of your yard or garden. If you want to record a video when you sleep, this can’t be possible because video length can be the most 10 minutes. 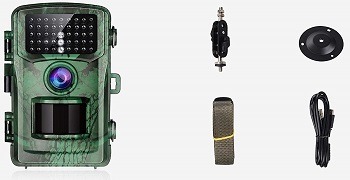 This camera material is waterproof, so it’s appropriate to set it up somewhere outdoor without worry of damage. You will get a mounting strap and plate to install the trail camera in an exterior area easily. This trail camera is also drop-proof, so it will be less fragile in case that straps weaken by time and the camera falls down.

Stands In Your Hand

This is one of the smallest wildlife cameras with the motion-activated feature. It is 11,6 cm long, so you can carry it in your hand. This is the big advantage of this camera for those who don’t like to carry a lot of bags when they go for a walk in the wood. It has a small screen but with a good resolution so you can watch pictures on the camera. 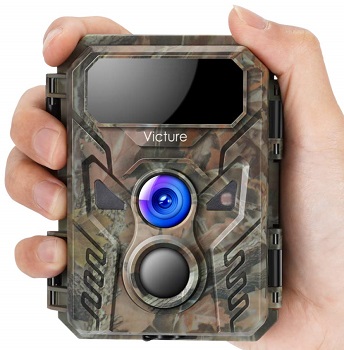 This small motion-activated trail camera captures good quality pictures of 16MP and record video of 1080P. The night photos are quality and the light isn’t so bright to disturb animals. It has 0,4 trigger speed which means that the camera can shoot fast animal movements.

This trail camera offers you to set the camera on your language or a language that maybe you understand better than English. Except for English, you can choose one of the European languages: French, Italian, German, Spanish. You can also set it on Japanese or Chinese. 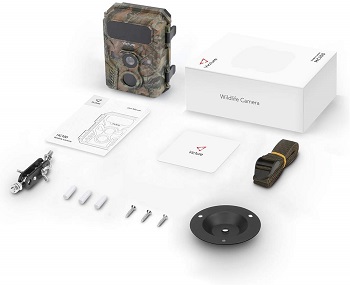 What Is In Victure Trail Camera Package?

In the box with the Victure mini trail camera motion-activated, there is also a mounting belt and a wall mount that you use to attach the camera on the tree. There is an Instruction manual book which should help you to make your camera start working. The package doesn’t include a micro SD card and batteries.

Conclusion: Which Two Models Are The Best?

All these reviewed models are best motion-activated wildlife cameras and you won’t make a mistake if you purchase any of them. However, I would like to recommend Victure Wildlife 20MP Night Vision Camera and Toguard trail camera. The first one offers a great night vision, so you can use it both for wildlife and security. Toguard trail camera is worth to buy because of its features like drop-proof and 22-meter motion detection range.